Fiona: ‘I feel like endometriosis has taken over my life’ 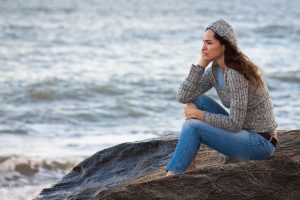 My story began when I first got my period age 11. I was always in pain, missing school, etc. I was taken to the doctor who told me this was part of life. They advised waiting a couple of years and then to go on the pill. My mother had bad periods and was told she needed a hysterectomy at 27. I was always having to use heat pads, hot baths and take a lot of paracetamol. I went on the pill at 15 and I suppose I just learned to live with it, thinking I had no choice. The migraines I got from the pill just added insult to injury.

I met my husband when I was 17 and stayed on the pill. We married in 2007 and things went from bad to worse. We got pregnant two months after we got married. I had a miscarriage in early 2008, after 10 weeks; we were devastated. We tried and tried. I got pregnant again in 2012 and miscarried again at 12 weeks. Both of our miscarriages were partial molar pregnancies (another thing that I feel doctors don’t fully understand fully in this country). I was under “care” and monitoring for two years after each miscarriage, and desperate to try again. After the second D&C things got worse. I waited for eight months for a period. In that time, for at least two weeks each month, I was crippled in pain and barely able to stand, but had no bleeding. I just kept getting told it was my body adjusting after the loss, and to give it time.

My GP decided that was enough and did her own research and wrote a rather snotty letter making her suggestions to the gynae department. It turns out I had scar tissue from the D&C which had closed over my uterus. The blood flow every month had nowhere to go. I am so lucky that I have a GP who listens.

We were then told to try again. Nothing happened, so after a few gynae appointments they suggested I might have endometriosis but that we should try IVF to get pregnant. The injections, the hormones, the systems played havoc with my body and mind.

My egg count and quality were very low so the IVF did not work. We began saving hard again and decided to go to Prague and use an egg donor. But it was advised to have a laparoscopy before going. Severe endometriosis, cysts and fibroids were “officially” diagnosed. But I was also told then too that my tubes were fused and needed to be removed. Another surgery… the impact of this both physically and mentally was draining.

We went to Prague (which I would recommend) and got pregnant with twins. Unfortunately we lost 1 baby at 8.5 weeks and the second at 10.5 weeks. Another heartache. We tried again in 2017 but this cycle failed.

In April 2018, I decided to give my body a break. I came off all hormones, painkillers, etc. A later MRI scan showed endometriosis covering my pelvis, attached to organs, and my cysts and fibroids have also gotten bigger.

I took redundancy in January because I just couldn’t work anymore. It is now back to a waiting game but I feel more empowered now. I feel like endometriosis has taken over my life. It has caused so many problems for me. The biggest one taking away the chance of me conceiving a child.

I won’t just be talked into a hysterectomy. I would rather wait and save for excision surgery.