I want to share my experiences with the wonderful Prof Marc Possover in Zurich and Peter Barton-Smith in London. They have changed my life!

I live in the West of Ireland and was diagnosed by laparoscopy with mild/moderate endometriosis at the age of 22, 8 years after the onset of my cyclical, severe pelvic pain. At the time, I was totally immobilised by period pains for a few days each month. Over the years, things worsened and I had many interventions to help with my pelvic pain, but there was never much endometriosis to be found and I never had any sustained relief (except for 4 months while on a chemical menopause, and for about a year after the birth of each of our daughters while I was still breastfeeding and my periods stayed away).

It got to the stage where for at least half the month I would be immobilised by the pain (for about five days around ovulation and ten days around menstruation) and I had to give up work and most of my social life. I couldn’t make plans, as I never knew when I would be able to walk due to the severity of the pain. When possible, I tried to schedule appointments / social engagements in the mornings, when there was a much better chance I could attend! I couldn’t even book a hair appointment in advance, I’d have to wait until I was having a ‘good day’ and hope someone could squeeze me in.

After my 6th laparoscopy, at the age of 32, I was told by a gynaecologist there was nothing more that could be done, except pain management. But pain management was not working, and I wasn’t happy to accept this diagnosis, particularly as my children were getting older and were becoming increasingly restricted by my physical limitations. This is when I started to do more research and found the wonderful online resource, Nancy’s Nook. After consulting this forum, and on the back of advice from Kathleen King from the Endometriosis Association of Ireland, I travelled from Ireland to see Peter Barton-Smith in London, in September 2018.

We found Mr Barton-Smith to be very professional, efficient and understanding. You really get the impression he cares about his patients (he has stayed in touch with me via email, since then, checking my progress). After my hour long consultation, he was instantly able to make sense of all my pains and symptoms. He advised me that the source of my pain was probably not, and probably never had been, endometriosis. He made a preliminary diagnosis based on my detailed history, a physical examination and ultrasound scans, that I had enlarged veins compressing my sacral plexus nerve. This was a revelation, and finally all my symptoms made sense, after 24 years! This took a while to sink in as up to this point ‘endo’ was such a big part of my story. Whenever people saw me crippled with pain, I always replied ‘that’s just my endo, don’t worry, I’m fine’. I now know that the reason the pains were cyclical, peaked at the onset of my period, and were made worse by physical exertion was because at these times there was increased blood running through these veins, putting more pressure on the nerve.

Peter Barton-Smith referred be to Prof Marc Possover in Switzerland, who is the leading expert in pelvic nerve surgery (neuropelveology) whom I went to see in November 2018. We also found him to be extremely professional, sympathetic and understanding. He took the time to answer all of our questions and was able to confirm the diagnosis of venal entrapment of the sacral plexus nerve after a couple of additional tests to rule out other possible causes. After organising the logistics and financing (my health insurance, after quite a bit of wrangling, agreed to cover the cost of the surgery) we scheduled surgery for February 2019. Prof Possover is such an amazing person who has dedicated his entire life to neuropelveology. The surgery, performed via laparoscopy, involved the removal of several enlarged veins that were basically strangling my nerve. He found no signs of active endometriosis. This was my 7th laparoscopy and I noticed an immediate difference post-surgery, I felt so much better than normal. Prof Possover visited me twice a day for the 3 days I remained in hospital post-surgery and took the time to listen to us and discuss things. I feel so privileged to have been treated by this man. The hospital itself is more like a luxury hotel (and not excessively expensive as he uses the services of a hospital owned by a group of doctors, which keeps the cost much lower than other Swiss hospitals) and Zurich is a beautiful city to visit. Prof Possover has an excellent support team who can help with all logistical details.

My recovery post-surgery went exactly as predicted. Prof Possover told me the pain would increase for 6 months and would then start to improve. This was a natural reaction while the nerves settle. He started me on the pain-killer Lyrica and told me to increase my dose weekly, as needed. I ended up on 550mg of Lyrica daily and 6.5 months post-surgery I started to feel better. It is amazing. It is like winning the lottery! I am 9.5 months post-surgery now and I can’t describe how much my life has changed. I no longer need pain killers. I can dance with my children now and make plans with confidence that I won’t have to cancel them last minute. I can push the trolley around the supermarket and come home, unpack the groceries and carry on my day, as opposed to retiring to the bed/sofa for the rest of the day as I had to do before (and this was only possible on good days!).

I was, as an unfortunate coincidence, diagnosed with Multiple Sclerosis 3 months post-surgery which was a bit of a shock. My neurologist thinks I have had the condition for a few years, but I never paid attention to the symptoms with all that was going on with my pelvic pain. I am been treated for MS now, but even with this, I still feel better, more physically confident and more empowered than I have in well over a decade, all thanks to these wonderful physicians.

I hope this will be of use to someone. I know this story differs from most, being that the direct cause of my pain turned out not to be endometriosis. I do know Prof Possover treats a lot of patients with endometriosis on the same nerves as he released for me. He told us while we were chatting one day, when he first performed this surgery to remove endometriosis from the sacral plexus nerve, over a decade ago, he was told he would only have a couple of cases in his lifetime. He had four the previous Friday alone! Endometriosis affecting nerves in the pelvic region (which is outside the area usually investigated by gynaecology) is quite common, but goes undiagnosed because of lack of awareness and expertise. Additionally, there are currently less than 10 surgeons in the world qualified to do this surgery due to high skill and experiences necessary, and the potential risky nature of the surgery if undertaken by somebody that is not extremely competent and highly-trained. 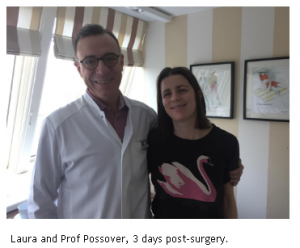 Some practical notes:
Surgery at the Possover International Medical Centre is not covered by the EU Treatment Abroad Scheme (even though Switzerland is generally included).

The initial consultation cost me €1,584, plus the travel to Zurich.

The surgery costs roughly €12,000 – €20,000 depending on the duration. My surgery only lasted 1 hour, so was about €12,000, including my 3 nights in the hospital. Though, as with any surgery, there is always the risk of complications and a more expensive surgery.

We will be able to get some money back on the travel costs with our MED 1 tax return.

We stayed in a hotel close to the hospital the night before surgery, and the night after discharge.

My husband stayed in the hotel for the 5 nights. We were able to fly back to Ireland then.

Post-surgery I filled out a form once a month for the first six months to send to Prof Possover’s team. He checks this and if there is anything he is unhappy with they will arrange a Skype call or amend the instructions. I did not need this. I had a few extra queries come up from time to time and his team always relayed this to Prof Possover and got back to me with his feedback very quickly. I will send another up-to-date form to Prof Possover at 12 months post-surgery.