I never slept my first night in hospital after my lap and excision surgery. I spent the whole night trying to get comfortable and unfortunately being sick thanks to the anaesthetic. I have never been one for sleeping on my back and try as I might I just couldn’t get comfortable rolling over. I felt an immense relief when the sun came up and I felt able to sit up and put the TV on. I was in Birmingham, a city I had never been to before, and the thought of spending the next few days recovering in a hotel instead of my own bed with my dog filled me with dread. 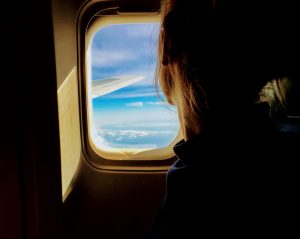 Eventually the nurses changed, and the day was beginning. My partner arrived and the door was left open so I could hear the noise of the ward waking up, and it was then that I heard the familiar accents from the hallway. I felt so overwhelmed hearing it, almost excited that there was something else there from Ireland; it was just so reassuring knowing that I wasn’t there alone, but also soul-destroying knowing another woman was forced to travel for her care.

After my check-up, I had to walk the length of the hallway. It was after I achieved this small feat that I would be deemed well enough to go home. The nurse noticing my accent asked me where I was from. She told me every single woman in my ward that day was from Ireland, all there for endometriosis excision surgery. A whole ward in a private hospital in Birmingham and it was full of Irish women who could not access care at home.

We need healthcare, not airfare, and we need it now so no other woman ever has to travel for care she deserves to get at home.

As my partner and I shuffled down the corridor, we could hear the voices of home coming out from each room. There was another Irish couple also doing the walk, we exchanged smiles and nods and kept on going. I almost forgot I was in England and afterwards felt very homesick. The next few days would be spent in a Premier Inn while my partner cared for me, and I tried to sleep the days away so I could get home as soon as possible. I just wanted to be home. I just wanted to see my Ma and have a cup of tea and a cuddle.

My surgery in Birmingham was life-changing. I finally got my endometriosis diagnosis after ten years of suffering, but it came at a great cost both financially and emotionally. Recovering so far away from home and not having my family around me was tough. I had to leave three days after my surgery as my partner could not afford to take any more time off work, which was hard going. There was nothing ideal about this situation and the situation so many other Irish women went through and are still going through.

There is little help for endometriosis on the island of Ireland. Women here are getting a poor deal when compared to other countries in the EU. The average wait for a diagnosis is 9 years on the island of Ireland, yet it’s 7 and a half in the UK. Why do we have to wait longer to be believed? Any year that goes by where a woman is not helped is a year too long.

We need a dedicated clinic for Endometriosis that not only offers a skilled excision surgery, regardless of what stage of endometriosis you have, but a whole-body approach to the condition that incorporates pelvic floor physiotherapy and mental health support. It is utterly shameful that many of the 10% of women in Ireland who suffer from endometriosis are forced to find care away from our shores. The problem isn’t being dealt with and women aren’t being listened to, we’re having to travel to England, Romania or wherever else women have to go to access this much needed care. We need healthcare, not airfare, and we need it now so no other woman ever has to travel for care she deserves to get at home.